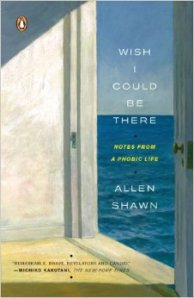 The feeling of panic that overwhelms the sufferer of a phobia must be one of the most unpleasant feelings that we are routinely forced to endure. I think that being set upon from behind and strangled must be akin to it – the increasingly laboured fight for breath while the heart hammers in terror, digestion deliquesces, vision dims and dizzies, sound is cut off and comes from far away. But worst of all, the urge to turn and run, fuelled as if by the energy of a nuclear explosion, has to be ignored. The phobic must sit and smile and try and look normal, while inside chaos rages, the Titanic sinks, great earthquakes rent the foundations of the self. Oh yes, I speak from personal experience.

Which is why I had to get hold of Allen Shawn’s amazing memoir, Wish I Could Be There, as soon as I heard about it. A composer, pianist and writer, Shawn is also an agoraphobic, afraid both of entrapment in subways, tunnels and lifts and the wide open emptiness of fields, car parks and bridges. He has a lot of trouble travelling on a road he has never taken before and struggles to get on a plane. Having fought against it for most of his life and not really got very far, he decided to write about the experience of being phobic and about some of the possible circumstances and causes that might have produced it. The result is one of those rare books of insight and compassion, utterly clear-sighted about the condition and a piece of admirable literary non-fiction as well.

Shawn says an awful lot of very useful things about phobias, not least that they have only a passing relationship to anxiety or nervousness. He points out that in his regular line of work, he often has to cope with the sort of public performance that scares the pants off most people. A phobia is quite different: ‘to describe the reaction simply as a mental phenomenon is misleading. By the time it constitutes a ‘problem,’ it has become a habitual response of both body and mind, as automatic as an allergic reaction and equally impervious to willpower.’ It’s provoked as much by physiological changes in the body – often almost imperceptible ones – that are ‘mistakenly interpreted’ as threats to our survival as it is by the symbolic or associative properties of an experience. ‘I remain dumbfounded,’ Shawn writes, ‘at how automatic, instantaneous, and severe my reactions are, not to mention how trivial the triggers can be.’ And it has been tied to certain personality traits:

phobics tend to be perfectionists, they tend to have an exaggerated need to please others, they tend to seek certainty and… many of us have in common the “need and ability to present a relatively placed, untroubled appearance to others, while suffering distress on the inside.” This describes me rather well.’

Yup, Allen, like looking in a mirror for me, too.

Whilst I found the more theoretical parts of this book full of interesting insights, I have to say that it’s Allen Shawn’s descriptions of his family that really engrossed me. He writes so well, with such generosity and tenderness, about a family that was shockingly unique and awkward to live in. Shawn knows that his father, an editor, suffered from similar phobias and that his mother may have done too – genetic inheritance is very much a part of the phobic landscape. But there were other factors that he believed may have had an impact. He was born with a twin sister, Mary, who had some severe form of autism compounded by other psychological problems that resulted in her removal to a care home when they were both eight. This was the fifties, and so nothing was said about the sudden and irrevocable absence of Mary. She was there one day and gone the next, and from then on they visited her very rarely. Allen Shawn was aware only later in life of the deep impact this had on him.

As someone who had grown up trying to decipher my mysterious sister, I was exquisitely attuned to implicit messages about how I should behave. The result was that I held in my feelings and my problems, and they grew without my even knowing it.’

To add to the underlying tensions and stresses of the household, his father kept a serious long-term mistress of whom they were abstractly aware in the form of their father’s odd double life: ‘it wasn’t uncommon for him to eat, or at least, attend, four or five meals a day to accommodate all the important people in his life.’ Something more, then, to keep under wraps, more seismic, churning emotions to be denied in the very act of living alongside them. ‘Cheerfulness that masks hidden anguish can be even more frightening than the messy truth,’ Shawn writes.

From my perspective now, the idea that as a child I felt the presence of dragons at the end of each corner of the known conversational world seems relevant to the development of my agoraphobia. That so much was off-limits seems pertinent to my current dread of exploring the unknown.’

Yet he is quick to defend his family from blame, too, insisting on the large number of cousins, aunts, uncles, grandparents, who all suffered from phobias of one kind or another, without such family circumstances to generate them. These are factors that in hindsight seem to have had a part to play, but his implication is that if you are born with a phobic mindset, you’ll find the reasons for that strange underground fear one way or another.

Ultimately, I think we have to see phobias as existing in the same existential constellation as dreams – overdetermined places where the knotty pathways of mind and body meet, a strange and sometimes sadistic way of processing more fear and dread than we have words for, a process whereby false correlations take on the power of divine judgements. And yet another curse on the heads of those who are sensitive and creative: ‘If they didn’t cause so much suffering, we could come to appreciate these strange revulsions as touching evidence of the human imagination,’ Shawn suggests, ‘spontaneous projections from our inner selves.’ If you are phobic then I strongly recommend this beautiful book, for all sorts of surprising and comforting ways of looking anew at a crippling problem.

28 thoughts on “Wish I Could Be There”