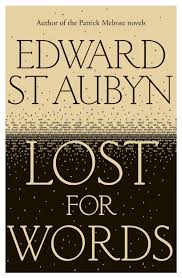 A novel about warring judges on the panel of a prestigious book prize that is essentially a poorly-masked Booker? This sounded like a delightful hoot to me when I heard about it, and I fell on Lost for Words with enthusiasm. I hadn’t read any of Edward St Aubyn’s Patrick Melrose novels but he was an author I was curious about and I figured that at the very least there’d be plenty of good writing. Well this was a masterclass in how good writing alone cannot save a doomed story, and for me it raised the question yet again as to why anyone would want to write a satire. It is the most adolescent of literary genres and I do not mean that in a good way. The book world is a complex place, rich in emotion and significance; when will anyone write a book that does justice to its reality?

Anyway, in Lost for Words, we find power-hungry MP Malcolm Craig appointed head of the judging panel for the Elysian literary prize. Elysian being a somewhat dodgy agri-chemical business whose notable creation, the ‘Giraffe carrot’ ‘had been a great help to the busy housewife, freeing her to peel a single carrot for Sunday lunch instead of a whole bunch or bag.’ He is joined by crusading journalist, Jo Cross, interested only in the ‘relevance’ of the books she reads, a good-looking young actor, Tobias Benedict, who never seems able to turn up for the meetings, an academic, Vanessa Shaw, who irritates the others with her hunt for good writing, and an ex-Foreign Office writer, Penny Feathers, who tries to be diligent but finds the judging process interferes with writing her latest thriller, Roger and Out.

I don’t need to say any more about these characters. They are exactly as you might expect them to be. In the full glory of their two dimensions.

Added into this mix are some of the writers whose books are competing for the prize. There’s a nymphomaniac but brilliant writer, Katherine Burns, whose admirable novel fails to make the longlist because of a mix-up at the publishers. Instead they send the recipe book of an elderly aristocratic Indian woman, aunt to a princeling determined that his magum opus, the enormous and unreadable The Mulberry Elephant, will be a huge hit. Alas and of course, his aunt’s cook book is hailed as a triumph of postmodernity and shoots onto the shortlist, provoking him to turn the family retainer into a hired assassin.

There are other people but I can’t be bothered to tell you about them. You can probably imagine.

Stuff happens. You can probably guess what.

Various pot shots are taken. For instance, genre writer Penny Feathers gets it in the neck because of her use of ‘some highly addictive software called Ghost’, a programme that can provide a cliché for any situation.

When you typed in a word, ‘refugee’ for instance, several useful suggestions popped up: ‘clutching a pathetic bundle’, or ‘eyes big with hunger’; for ‘assassin’ you got ‘ice water running through his veins’, and ‘his eyes were cold narrow slits’…. She could scroll and click, scroll and click all day, with the word count going up in leaps and bounds.

And of course the judging process itself is fair game.

He could hear Vanessa’s exasperation as she gradually realised that the majority of her so-called ‘literary’ novels were not going to make it onto the Short List. She kept trying to argue that the other novels lacked the qualities that characterized a work of literature: ‘depth, beauty, structural integrity, and an ability to revive our tired imaginations with the precision of its language’. The poor woman didn’t seem to realize that what counted in the adult world was working out compromises between actual members of a committee that reflected the forces at work in the wider society…

St Aubyn is capable of making clever and incisive remarks. He writes really well. Why lower himself, then, to some of the most tired and lazy cliches when it comes to character, situation and plot? Well, my own issue with this is basically about satire. Satire is fuelled by unresolved emotions – anger, spite and contempt for the most part – and in the rush to make a cheap laugh, it rarely pauses long enough to contemplate the objects of its derision. Satire is pretty much permanently doomed to using stereotypes as its foundation. St Aubyn does try to bring in some much needed compassion – Vanessa is deeply worried about her anorexic daughter and Katherine’s love life eventually calms down – but this just makes the book feel choppy and unstable. What I would love to see is a novel about the book industry that tries to be serious and real, and maybe it would be satirical inadvertently, but then again it might not. At least the result would be unpredictable.

Unfortunately, back in 2006, Edward St Aubyn’s novel Mother’s Milk, was shortlisted for the Booker and surprisingly failed to win it. At the time he is reported as saying he was relieved about this. And then in 2011 when his novel At Last wasn’t longlisted, he was quoted in interview as saying: “I’m not going to spend a lot of time thinking about a prize I can’t win. The Booker 2011 is of no more interest to me than the world heavyweight championship which I’m not going to win either. It is irrelevant. What I have to do is start writing a new novel.” You have to wonder whether it’s wise for someone with that kind of history to write this kind of novel.

28 thoughts on “Lost for Words”