It’s curious the way that some of the most amusing and comforting writers develop their voice out of personal tragedy. Any reader might be forgiven for thinking that Angela Thirkell led the same sort of easy, untroubled life of the gentry – with visits from the vicar, summer fêtes up at the village’s manor house and children mostly packed off to boarding schools – that the protagonists of her novels enjoy. Her early connections were unusually good: one of her grandfathers was Edward Burne-Jones and she could count among her cousins Rudyard Kipling and Stanley Baldwin. But by the time she began to write, she was no stranger to hard circumstances. Her first marriage was to a singer, James Campbell McInnes, who turned out to be a violent drunk. She had two sons with him, and a daughter who did not survive, before divorcing him in 1917 in a blaze of undesirable publicity. She married again, this time an Australian engineer and army officer, the splendidly named George Lancelot Allnut Thirkell. They went to live in Melbourne, where she had a third son, but the lower middle class life style she had to adopt was not at all congenial to Angela. Claiming it was nothing more than a holiday, she packed up the sons that would come with her and sailed again for England, never to return. And never to marry again: ‘It is very peaceful with no husbands,’ she was quoted as declaring.

Forced to generate some income of her own, she turned to writing, and published her first novel at the age of 43. She soon found she could publish a novel a year and had almost forty to her name before she died.

Last summer I read Wild Strawberries, and just this morning I finished High Rising, the first two reissues by Virago. They belong in the same stable as Dodie Smith, and E. F. Benson, as the gentlest form of social satire. She has been compared to Barbara Pym, but Pym had a great deal more to say, of a sharply insightful nature, about loneliness. Angela Thirkell is just there to guide her characters through the mildest storms in village tea cups, before the inevitable and charming happy ending, easily effected when marriage proposals fall so readily from the lips of her male protagonists. In High Rising, single mother and author of ‘good bad books’, Laura Morland (Thirkell in semi-disguise) is drawn into a web of complications surrounding the new secretary of her dear friend, George Knox. The secretary, Una Grey, is a scheming sort with an unbalanced temper and a tendency to send poison pen notes, who is longing to marry some unsuspecting meal ticket. Laura and her saintly friend, Anne Todd, step in to prevent George from a typical Thirkellian fate of marrying in a deep state of inattention – a sort of unconscious coupling that must set up a precedent for Gwyneth Paltrow’s latest conscious uncoupling, perhaps.

None of this plot particularly matters. Angela Thirkell sets out to amuse, with Laura’s state of mind legible in the state of her hair – one particularly taxing morning leaves her looking ‘like Medusa on a heavy washing-day’ and her relationship to her small son Tony, a mix of adoration and irritation, offering wonderful scenes at his boarding school, notably a boxing match where ‘shrimp-like figures’ approach each other with ‘downward clawing motions’ from arms that looked ‘about as strong as boiled macaroni’ before the gong sounds and they ‘fled back to their corners, where they tasted real glory, lolling majestically, arms outspread on the ropes and feet dangling well off the ground.’ In fact, the less that happens, the better Angela Thirkell is at describing it. The essence of her world is a kind of Edwardian nursery, where silliness occurs because of short tempers and wounded pride, but there is always someone sensible on hand to restore order. As in the case of George Knox’s lonely approach to his house ‘which occasionally caused one of Mr Knok’s maids to have hysterics and give notice. But being local girls, their mothers usually made them take it back.’ 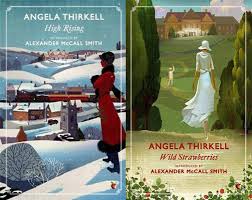 Servants are intriguing in Thirkell’s novels. While their masters and betters restrain themselves at all times to the most tepid expression of emotions, the mildest of manners and the most distantly tender of relations (or as Hermione Lee phrases it: ‘these light, witty, easygoing books turn out to be horrifying studies in English repression’) the servants are there to tell it like it really is, with strong language, violent emotions and cherished paranoia. They may argue and shout, act compulsively and capriciously, but their emotional stamina lasts well beyond that of their employers. The most disturbing parts of Thirkell’s books are the out-of-date attitudes towards foreigners and the lower-classes, but if her main protagonists patronise their servants, it’s nothing in comparison to the contemptuous patronage they are forced to suffer in return.

It’s a particular and distinct world that Angela Thirkell writes about, one in which small boys want nothing more than to accompany their elders on a hunt, one where kindly doctors don’t charge fees to their favourite patients, where people are generally good and kind and helpful to one another and things work out just fine, thanks to the benevolent intervention of fate. And for the most part, Thirkell’s humour is exceptionally tender, born of loving amusement. It’s a strange, lost world, but a gentle one.

We have to feel for her, then, that one of her sons, Colin McInnes, was a bohemian bisexual who grew up to write books about everything his mother could not bear: ‘urban squalor, racial issues, bisexuality, drugs, anarchy and decadence. He found her novels ‘totally revolting’, a ‘sterile, life-denying vision of our land’.* Unsurprisingly the two of them hated one another, and she cut him out of her will (though she never said anything unpleasant about his books). When we read a Thirkell novel, we get to blindside the uncomfortable, challenging elements of life – that’s the entire point of reading them, to take time out of reality. You do wonder what it must have been like for Thirkell to live there in her imagination all the time.

* Hermione Lee wrote a very entertaining and perceptive essay entitled ‘Good Show: The Life and Works of Angela Thirkell’, which appears in her book Body Parts: Essays on Life Writing. The quote comes from this essay.

22 thoughts on “The World of Angela Thirkell”