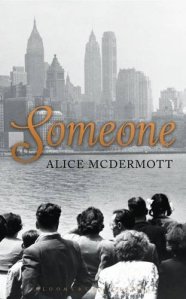 Alice McDermott is one of those writers who make you wonder how on earth they do it. Every sentence in her deceptively simple novel, Someone, is written with perfect economy and a minimum of literary bling, and yet the effect she creates is powerful and intense. In this brief and unshowy 232 page novel, we travel through the life of Irish Catholic immigrant, Marie, from her devotion, aged 7, to her father, a newspaper man who likes a drink a bit too much, to her own old, old age, alone and almost blind in a care home. If this sounds bleak, it isn’t. Mortality is a guiding light through the episodic narrative, but that light is joyful, tender and illuminating. Mortality is not a reason to despise humanity, or recoil in horror at what becomes of them, but a reason instead to pay close attention to life in the moment.

The character of Marie springs from the pages, especially in her early years. Her quiet self-containment and the glasses she wears as a child belie her stubborn and contrarian nature, defying her mother outright when she decides to teach her how to make bread, because ‘Once you learn to do it, you’ll be expected to do it.’ She loves easily and deeply, though there aren’t that many people who appear over the course of her life to whom she gives her love. There is a tight if unexplained and unexplainable bond between her and her older brother, Gabe, the clever one of the family who has a brief career as a priest before his enigmatic departure from the church. And she has a satisfying career with the affable undertaker, Mr Fagin, working as a kind of hostess at wakes and funerals. This gives her – and the reader – a point of convergence in the narrative where the fates of many secondary characters passing through the pages finally come to rest. Mr Fagin, who is trying to reclaim his good name from Dickens (an author he loves) presses David Copperfield onto Marie, and typically she hands it back to him unread, ten years later when she marries.

The wisdom that she would rather take in comes from Mr Fagin’s old mother who lives upstairs, visited regularly by the Sisters of Charity. Marie comes to sit with them sometimes and bring them news from the funeral parlour. The elderly women then provide their own obituaries for the newly dead, with a kindness and insight that charms Marie, ‘an eager, industrious, even entertaining pleasantness in all of it.’ The humanity in their storytelling is a crystallisation of McDermott’s own, the way that ‘she and her compatriots would lean together to tell as best they could the story of the life – breathing words onto cold embers was how I sometimes thought of it, and, one way or another, getting them to glow.’

The small immigrant New York neighbourhood where Marie grows up becomes one of the characters in the novel, redolent of an era where Big Lucy, the mentally disabled local bully, is locked away in the asylum as soon as she develops signs of sexuality, and where homosexuality is a cause for shame or contempt. Yet there is also a very different but potent form of acceptance on offer; Billy Corrigan, blinded in the war, is the chosen umpire for the local boys’ games of stickball, and the early accidental death of Pegeen, part Syrian, part Irish, is understood to be a normal tragedy, not something to be met with righteous outrage. In this tight-knit community there are harsh judgements and irrational rules, but there is also solidarity and tenderness of a kind we hardly know about any more.

All the events of Marie’s life – her first, failed love affair, her marriage, her excruciating first experience of childbirth, provide Alice McDermott with an opportunity to bring out the sensually vivid and powerful in the every day, in a way that is constantly brimming with significance. The narrative is episodic and not neatly chronological, yet there is an internal rightness about the way we follow Marie’s life, a reassurance almost that what is impenetrable in childhood will be experienced – even if only through memory – with fresh insight in later years. Puzzles will be solved, at least partially, wounds will heal, for all the everyday crises and sorrows that beset her characters, there will be time that passes, bringing solace and new threats, new challenges to overlay the old. Holding her newborn son in her arms, Marie understands ‘I was a mother now and all the terrible things that could maul a child, snatch him from the world, had bared their teeth and trained their yellow eyes on me. The baby was warmly asleep against my shoulder.’

This is a beautiful, compact book that manages to encompass all of life with the lightest of touches, the simplest of details. It was an amazing reading experience, and I don’t know how Alice McDermott does it.