I seem suddenly to have a little rush of essays out on the internet.

In the latest edition of Cerise Press, two essays on authors and their sordid love lives: 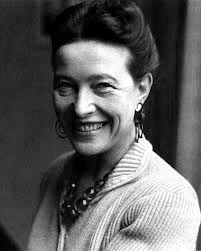 “There has been one undoubted success in my life,” she wrote in Force of Circumstances (La Force des choses), “my relationship with Sartre. In more than thirty years we have only once gone to sleep at night disunited.” Yet when she wrote those words, Beauvoir at fifty-five was feeling sad and fearful for the future. She was suffering the loss of her youthful looks, afraid that sexual relationships were now at an end for her, and desperately jealous of Sartre’s latest love affair. After their deaths, the executors of Beauvoir’s and Sartre’s literary estates published the letters they wrote to one another and to other lovers, revealing a very different story to the official version that Beauvoir had created. Generally, Beauvoir’s memoirs were rigorously honest about her experiences, but when it came to love affairs, the accounts she gave were partial; as the full facts of her life were revealed, the portrait of a different woman in love emerged.

Wilful Blindness; The Marriage of Andre and Madeleine Gide

‘There must have been quite a bonfire. A thick plume of smoke must have risen into the still air of a sunny summer day in 1918, on the family estate in Normandy that Madeleine had inherited and where she lived for the most part without the company of her footloose husband. This last time when Gide had left her, he had gone too far, writing a dreadful note in which he said he was “rotting away,” all his “vitality ebbing away… I was dying there and I wanted to live… I had to live and that meant escaping from there, travelling, meeting new people, loving people, creating!” And so while Gide was away, loving and living and travelling, Madeleine had taken the key to the desk in which the letters he had written her were carefully stored. She had taken those letters out, read them for one last time, and then consigned them to the flames.’

Clearly, I am sending out a message to all dead authors: you can run but you can’t hide!

20 thoughts on “Me, Elsewhere”