I would never have read The Red Book if I hadn’t first had my attention drawn by those two whip-smart women at Shelf Love to this article by Deborah Copaken Kogan. A Harvard graduate and clearly an intelligent and talented woman, it’s pretty horrifying to hear how her work has been manipulated, how her image has been derided and how she has been overlooked and unrecognised in a literary arena that remains a hostile environment for women. 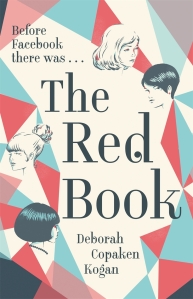 And so I thought, right, well, I’ll definitely read her novel – longlisted for the ex-Orange prize – and give it an honest review. Upfront I can say that the thing I liked least about it was the cover, which to me is a bit… ugh. And from her article, I imagine it was the part of the book that the author had least control over.

The story is not unfamiliar territory: four women friends return to Harvard for their twentieth reunion weekend, trailing family members, doubts, hopes and expectations, all of which will be put through the wringer in two days of triumphs and disasters. The red book of the title is compiled in advance of the reunion; each graduate being asked to write a two or three paragraph entry on the state of their lives at that time. These pages of the red book are reproduced at the start of each chapter, introducing us to characters who will feature in the subsequent events. It doesn’t take long before we realise that the (mostly) glowing accounts of lives are verbal smokescreens and the reality is altogether messier and more ambivalent.

Our main protagonists are: Addison, an over-privileged WASP type in a deeply unhappy marriage whose ambitions to become an artist have been subsumed by the care of their three children. Gunner, her husband is a writer who hasn’t actually written anything for the past decade, and who bows out of family life entirely. Clover, who was brought up in a Californian commune, has just lost her job with Lehman Brothers. She’s recently married and frustrated by her inability to fall pregnant.  Mia is a motherly type who enjoys nurturing her three boys and new baby girl. She’s married to a successful film producer (and the nicest character in the book) and once had hopes of becoming an actress. Finally Jane is a Vietnamese orphan, adopted by a doctor and brought up by his loving wife. Jane works as a foreign correspondent, lives in Paris and seems doomed to lose the people she loves. Her first husband died in the field, and now she has just lost her mother. She’s recently found out that the man she lives with was briefly unfaithful to her during the seven months she was away in America caring for her sick mother, and it’s proving impossible for her to come to terms with so many abandonments at once. So we have a set up in which there are many people bringing a tremendous amount of baggage with them. And then the reunion parties begin.

This is a book in which a great deal happens. Too much happens, if I’m being completely honest, and so some of the characters were a tad underdeveloped and some of the sentences were stretched beyond their natural limits. Given that the novel bravely tackles the treacherous waters of overachievement, it’s slightly ironic that it tries to do far too much. That being said, I was impressed by the dexterity with which Copaken Kogan choreographs her material, and there was never a moment when I didn’t understand exactly what was happening and what the implications were. There were some farcical, almost slapstick scenes that felt excessive and some moments as well that touched me deeply. In particular, a wince-inducing scene in which a classmate eking out an existence with schizophrenia turns on the people around him and berates them for not doing enough with their talents, for giving up on their ambitions. Do they know how fortunate they are, he demands, just to have the gift of living free from psychological misery every day? I confess this reminded me of the depths of chronic fatigue, and how I used to wonder why people procrastinated and complained when they had the good fortune to feel well. Honestly, we don’t know what we’ve got until it’s gone.

This scene was part and parcel of a really wonderful exploration of overachievement across the novel, what it means to carry the burden of such insurmountable expectations, how dishonest and sneaky people become when they are unnecessarily ashamed of the tribulations life has thrown in their path, and how life has no respect for the way things are meant to go. The final chapter, in which the friends attend the memorial service for classmates who had died, was the stand out. Contemplating that brutal end point makes for a proper perspective on what it is to live, what is really of value, and I found it extremely moving. Overall this was an intelligent, fast-paced novel, definitely worth reading if you’re drawn to the subject material.