Belle Vie is a gorgeous antebellum mansion, restored to its former glory and now the site of weddings and conferences, displaying its authentically renovated slave cabins to hoardes of tourists. But when a migrant worker is found buried in a shallow grave with her throat slit, a woman from the other side of the fence where a large and soullest corporation farms corn, the old stories of rich and poor, powerful and oppressed rise again in modern configurations. Caren Gray is the black single mother charged with the somewhat ironic task of managing the estate and grounds, a job that has even more layers of history for her as she grew up in the servants’ quarters when her mother was the cook, and can trace her roots back to one of the original slave labourers, a man named Jason whose attempts to leave the plantation were shrouded in mystery. With so many layers of time and guilt surrounding the events that take place, Attica Locke does a tremendous job of unravelling her complex plot with pace and lucidity. In fact the whole thing is so neat and tidy it seems to run on rails, and as events sort themselves out, the parallels between past and present become uncannily clear. This is such a good book, rich with its themes and characters, beautifully written, and consistently gripping. Is it a little bit too tidy? Well, maybe, but not if you like all your loose ends tied at the conclusion to a story. 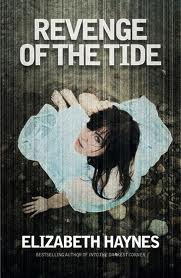 Revenge of the Tide – Elizabeth Haynes (Dark Tide in the US)

Genevieve Shipley is living out her dream of life on a houseboat in a quiet and companionable marina in Kent, but it becomes clear pretty quickly that she has paid a great deal for her peace and freedom. The first boatwarming party she throws ends with the gruesome discovery, in the small hours of the morning, of a body floating off the pontoon, and worst of all, Genevieve knows who she is and doesn’t want to say. Caddy is a friend from her old life in London, one that was split between a day job she hated in executive sales, and a nightlife that gave her more kicks than she bargained for as a pole dancer in an exclusive club. Genevieve took the job because she had discovered a talent for dancing, and it’s somewhere she can make a lot of money, fast. But when her two lives collide and her opportunist boss turns up at the club, she realises she will have to take on a job that’s just the wrong side of legal, if she’s to make good her escape. The story unfolds in the present as the investigation into Caddy’s death finds her fending off law enforcers from both the police and from the criminal underworld, and gradually what happened in the past, and the circumstances that brought her to the boat and into danger are revealed. I read this more or less in the course of one day when I was tired and wanted a rest, and I really enjoyed it. It’s well written and surprisingly compelling, and the different atmospheres of the marina and the London club are vividly evoked. It’s not Tolstoy, it’s a little obsessed with Genevieve’s romantic life, and nowhere near as clever and literary as The Cutting Season. But I hunkered down with it most satisfactorily. 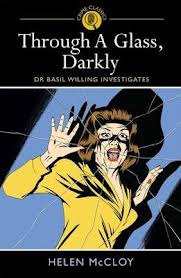 Through A Glass, Darkly – Helen McCloy

A vintage crime thriller, based in an exclusive girl’s school and involving supernatural doppelgangers – really, what’s not to like? Faustina Crayle, thin, anemic and a bit pathetic is distressed to be summoned to the headmistress and abruptly dismissed, only a few weeks into the autumn term. When she presses her for a reason, formidable battleaxe, Mrs Lightfoot (‘Heavyhoof’ to the girls) refuses to say more than that she creates a disturbing atmosphere and for the sake of the school she must go. Faustina runs to her only friend, another new teacher, the delightfully named Gisela von Hohenems, who just happens to have an attachment to psychologist-come-detective, Dr Basil Willing. The story gradually comes out that Faustina has been causing hysteria amongst the servants and the young impressionable girls by appearing to be in two places at once. Even stolid and unshakeable Mrs Lightfoot gets the wind up when Faustina’s shadow brushes by her on the stairs as the original calls to her from the very top of them. Faustina’s exit from the school is thought to be the end of the matter, but before long a suspicious death takes place, and an eye-witness swears the culprit is Faustina, who was most definitely two hours away in New York at the time. Oh this was a period piece of fun, with gloriously old-fashioned speculation about the possibility of repressed emotion being projected into a malevolent double, Basil throwing his weight around manfully and aristocratically, and references to Goethe, who apparently had a double himself. But it’s beautifully plotted, consistently intriguing, and ends with just the right amount of ambiguity (though not for readers who like everything cut and dried – read The Cutting Season instead). From Arcturus Crime who has recently published a series of classic crime from the forties and fifties.

13 thoughts on “Crime in Brief”