It’s not often I make myself a reading plan, but October and November contain more challenges and commitments than I’ve made in many a year on this blog. I need to keep it all straight in my head, plus, I have suddenly been overtaken by a sudden passion for a topic which will knock my plans out of shape if I let it. 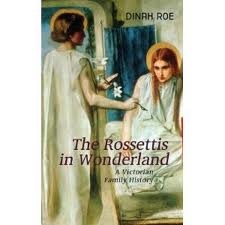 First of all, I have to finish off a couple of October reads, both review copies. One is the splendid biography of the Rossetti family, The Rosettis in Wonderland, just the most beautiful book and a very good read. The other is Night Soul and  Other Stories by Joseph McElroy. I didn’t get off to a great start with this because I was trying to read it when I was tired and hurried, and it’s the sort of writing that calls for steady focus from the reader. I’m interested in McElroy, as he is one of the most literary writers out there, and he calls forth adoration and horror, all over that vexed question of readability again. I admit I have a thing for books that provoke the love/hate reaction; they make me immensely curious, so I want to give this one some quality time. Both the McElroy and the Rossetti biography require concentration, and I’ve been low on that in the early part of the month. Time to pull my socks up.

I also want to finish off my participation in Carl’s RIP challenge. Having made a huge list of possible reads, I have of course finally plumped for a book that wasn’t on it, Shirley Jackson’s The Haunting of Hill House, just because it’s what I feel like right now. I may even start that one tonight. I might not get a fourth novel read this month, but I’m sure it’s okay to extend the challenge a bit.

Then there’s always a book that drags over the line, isn’t there? This month it’s poor old Marguerite Yourcenar and her Memoirs of Hadrian. I’m reading this for the Wolves, who thankfully seem to have forgotten about it, too. In all fairness I enjoyed the start. But it’s written in dense, sophisticated French, very beautiful and all, but oh so slow. I haven’t reached the part where the plot begins, but given it’s a French novel in the classical style, it’s quite possible there won’t be one. Knowing this does not help. The poor book has been pushed aside by all kinds of showier, quicker, more gripping reads, which isn’t fair. I feel dreadful, like I’m condemning it to be the runt of the playground, but then pity isn’t making me pick it up either. I must just get back into it again, and all will be well.

And then… drumroll…. It’s November!

Two more challenges for me. The first is the ongoing Portuguese Literature challenge hosted by the man with the most unique perspective in the blogworld, Amateur Reader at Wuthering Expectations. I’m going to be reading Eça de Queiros’s The Crime of Father Amaro, and I’m really looking forward to that.

Then Caroline and Lizzy are hosting German Literature Month. I’ve quite possibly gone mad here, but I’m going to try and read Robert Musil’s The Man Without Qualities. My copy contains 1,130 pages, but despite the mega-chunkster size, I have to say in all honesty, it looks FAB. Let’s be honest, when am I going to actually buckle down and read a beast like that, unless there’s a bloggy challenge to spur me on? But what to do – should I post in parts, or save it all up until I reach the end? Don’t know yet.

Couple of very intriguing review copies this month. The Coward’s Tale by Vanessa Gebbie concerns a young boy sent to live with his grandmother in a small Welsh mining community, haunted by the collapse of a pit many years ago. I think it’s about the friendship the boy strikes up with the town’s storyteller and the way he gradually unlocks the secrets of the town’s past. The other book, The House of the Wind by Titania Hardie is a time slip novel centred on a villa in Tuscany, and what’s not to like about that?

Two books I have promised myself this month, simply because I’ve been wanting to read them: E. M. Forster’s A Passage to India. I just adore Forster. And Elizabeth von Arnim’s The Pastor’s Wife, which I picked up at the bookstore where I work. I just love von Arnim, so enough said there.

Finally, this project I have conceived a passion for (and you will probably all think I’ve finally lost it) but I’ve become very interested in American literature from the Depression years. It’s having to hear people on the radio go on and on about how the current economic situation is as bad as the Depression, and I think this is complete nonsense. Very few of us have to suffer the way people did back then, and we should all be jolly thankful about that. But I would like to write about the way the depression affected the literary imagination of America at that time. I’ve got Steinbeck’s Grapes of Wrath, although it’s the book I’m least interested in reading because it focuses right on the experience of the Depression. What’s much more intriguing to me are the books that use it only as a backdrop. So I’ve got James M. Cain’s The

Postman Always Rings Twice, and two novels by Nathanael West: Miss Lonelyhearts, about a man writing as an ‘agony aunt’ and corresponding with his suffering readers, and The Day of the Locust, about 1930s Hollywood. I also went to the UL and took out three huge brick-like biographies of Steinbeck, Cain and West.

I’m not going to get through all that in five weeks, am I? Still, the weather is always dreadful in November, so I’ll just hunker down with the books and see what I can do.

18 thoughts on “Getting Organised”